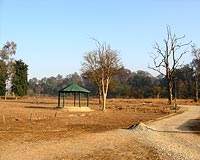 Jim Corbett National Park has a temperate climate. Like the rest of India, Corbet also experiences the three distinct seasons, namely summer, winter and monsoon. The rare species of wildlife, which finds refuge in the wildlife reserve, is well-adapted to these seasonal variations and temperature. For the convenience of both the animals as well as the tourists, the park remains open between the months of November and June, which agreeably is the best time to visit the park. However, to prepare yourself for the expedition, it is necessary to know the weather and climatic conditions of the place.

Summer
The summer season commences from the month of March and lasts till mid-June. The days can be very hot during this time, with the temperature crossing the 40°C mark most of the times. The scorching heat of the sun becomes quite unbearable for the animals as well as the inhabitants. Also, a hot wind, specific to the region blows throughout the day, during summers. As a result, a thick cloud of suspended dust develops over the region, which is cleared by occasional thunderstorms.

Monsoon
The onset of the monsoon is witnessed in mid-June, which lasts up too October. The rain showers bring respite to the parching landscape from the blazing temperature. The weather becomes quite pleasant with the drop in temperature. However, the park is closed for the tourists during the rainy season because this is primarily the mating season of most of the animals. Apart from this, the area is also prone to soil erosion and land slides which can prove to be risky. During monsoons, the humidity soars up to 98 percent, making the weather very sultry.

Winter
Winter months from November to February are ideal to explore the bounds of the park. During this time, the park heartily welcomes all the tourists. The weather is balmy during this time of the year. The humidity level also drops down to about 57%. Animals are also easily visible during this time as they come out to bask in the sun. While thedays are delightful, the nights are fairly cold. The night temperature can fall down to 5°C. During the night, a local wind known as "dadu" blows in the region, lowering the temperature significantly.